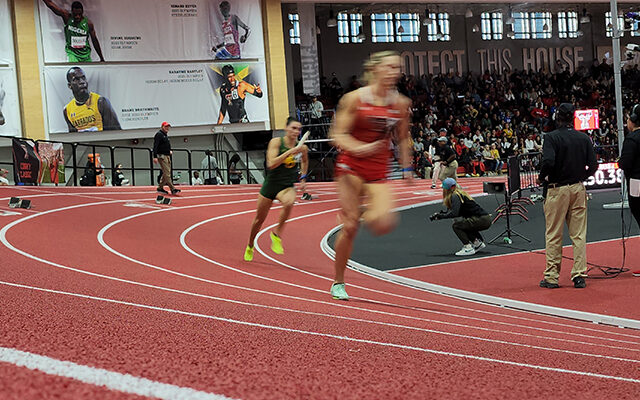 In back-to-back weekends, Demisha Roswell has lowered her 60m hurdles school record from 7.99 to 7.98. After today, Roswell owns the No. 2 time in the country as Masai Russell from Kentucky claimed the final with a run of 7.75, a new NCAA collegiate record.

Meanwhile, in the men’s 4x400m relay, the team of Caleb Dean, Courtney Lindsey, Shaemar Uter and Nylo Clarke set a new Tech mark running a 3:04.52. It broke TTU’s previous mark of 3:0475 set back in March of 2005 by Johnny Jacob, Terry Beard and Olympic medalists of the Bahamas, Andrae Williams and Michael Mathieu. Tech’s mark currently is No. 1 in the country.

Over in the men’s pole vault, Zach Bradford was one centimeter away last weekend from the school record, Friday night, there was no stopping him. On his final attempt at 5.67m (18-7.25) Bradford cleared the bar for the new mark which was previously held by Brandon Bray at 5.62m (18-5.25). Bradford continued his run going one more height, clearing the bar at 5.72m (18-9.25) before calling it a night. His mark as of tonight, leads the country.

Rosemary Chukwuma clocked in a time of 22.99 for the third-fastest time in school history. At one point during the meet, Chukwuma led the nation in both the 60m and 200m times.

The Red Raiders are back in action next week Jan. 26-28 for the Texas Tech Open & Multis.