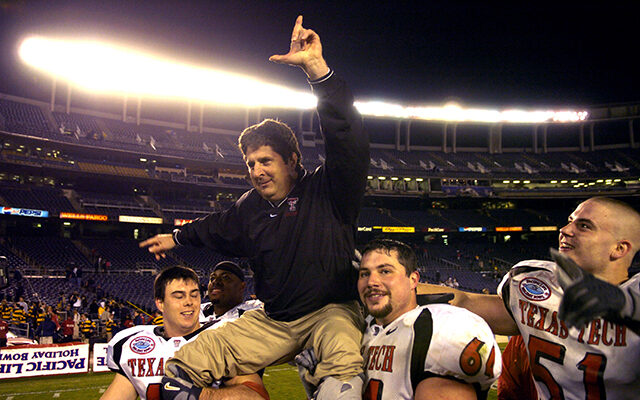 As a final act of charity, Coach Leach donated his organs to help others.

“Mike was a giving and attentive husband, father and grandfather. He was able to participate in organ donation at UMMC as a final act of charity. We are supported and uplifted by the outpouring of love and prayers from family, friends, Mississippi State University, the hospital staff, and football fans around the world.  Thank you for sharing in the joy of our beloved husband and father’s life.”

There will never be another one quite like Mike Leach.

I am very sad today, but also so grateful to have had the opportunity to play for Mike Leach and to call him a friend. He made me tougher and more capable – both as a football player and as a person. Rest in peace, Coach. We will forever swing our swords just like you taught us. pic.twitter.com/fIKpneLEDU

His time at Texas Tech was only part of the story, but Mike Leach helped change the game during his time in Lubbock. pic.twitter.com/gMZfzyZD2V

Mike Leach changed my life by giving me an opportunity to chase my dreams. I will forever be grateful to him. Thank you, coach!! You will be missed. 🏴‍☠️

Mike Leach certainly marched to the the beat of his own drum, and did it better than anyone. From day one as a head coach, he didn’t conform, didn’t care what anyone thought and didn’t mind ruffling feathers. He’d cause you to beat your head against the wall – many times. (1/4)

When I was at Tech, we camped out for games back when they let us do it in front of the student entrance. One year there were only like 15 or 20 of us. Mike Leach let us all on the field to play football and gave us branded footballs. He loved the fans and we loved him right back

There's a shadow over today, but he wouldn't want you to mourn. Mike Leach would want you to remember the good times and never EVER stop swinging your sword!

Mike Leach was one of the first who reached out to me after I got divorced. He shooed away his sid and took a scheduled 10 min interview into 2 hours where we talked life, family, Indians and ended up in his family box where his wife introduced me to some of her friends.

He was introduced to a middle schooler I knew who was a big fan at an open practice. Coach Leach interacted with the kid and followed him throughout his career. When the kid's mother passed, Coach Leach called him to give his condolences. He followed the family from that practice

on. Finally, Coach Leach found out that my wife was throwing me a 40th birthday party and showed up to wish me happy birthday and to tell a story. He didn't have to stop by, he just did.

Some Texas Tech fans may hate the Pirate. But there he has a special place in my heart.

My prayers go out to the family, friends, players, and colleagues of Mike Leach. I, for one, am grateful that I had the opportunity to meet him. What a character! #SwingYourSword, Mike! pic.twitter.com/3S1cAcxSpm

One of my fav text exchanges with Mike Leach. Posting bc he assembled the best coaching tree in modern history, and shapes college football and NFL as we know it today— Riley, Dykes, Holgs, Harrell, Briles, Kingsbury, Aranda, Simmons, etc. Mike changed everything. 🏴‍☠️ pic.twitter.com/9km2Q5VGUs

“Texas Tech Athletics joins the countless others across the game of football who mourn the passing of Mike Leach. Coach Leach will be forever remembered as one of the most innovative offensive minds in college football history. His impact on Texas Tech Football alone will live on in history as one of the greatest tenures in the history of our program. From his 84 wins to his record-setting offenses, Coach Leach quickly built a legacy here at Texas Tech that will never be forgotten. Our thoughts and prayers are with Coach Leach’s wife, Sharon, and their entire family during this difficult time.”

Leach remains Texas Tech’s all-time winningest coach after finishing 84-43 overall over his 10 seasons leading the Red Raiders from 2000-09. His tenure was highlighted by the Red Raiders’ 11 regular-season wins in 2008, which matched the Texas Tech single-season record for victories. The Red Raiders defeated No. 1 Texas that season, pushing Texas Tech to as high as No. 2 in the national rankings on its way to an appearance in the Cotton Bowl.

Following his tenure at Texas Tech, Leach spent eight seasons at Washington State, pushing the Cougars to a 55-47 record. He was in the midst of completing his third season as the head coach of Mississippi State at the time of his passing.

Mississippi State University President Mark E. Keenum said: “Coach Mike Leach cast a tremendous shadow not just over Mississippi State University, but over the entire college football landscape. His innovative “Air Raid” offense changed the game. Mike’s keen intellect and unvarnished candor made him one of the nation’s true coaching legends. His passing brings great sadness to our university, to the Southeastern Conference, and to all who loved college football. I will miss Mike’s profound curiosity, his honesty, and his wide-open approach to pursuing excellence in all things.

“Mike’s death also underscores the fragility and uncertainty of our lives. Three weeks ago, Mike and I were together in the locker room celebrating a hard-fought victory in Oxford. Mike Leach truly embraced life and lived in such a manner as to leave no regrets. That’s a worthy legacy. May God bless the Leach family during these days and hours. The prayers of the Bulldog family go with them,” Keenum said.

MSU Interim Athletics Director Bracky Brett said: “We are heartbroken and devastated by the passing of Mike Leach. College football lost one of its most beloved figures today, but his legacy will last forever. Mike’s energetic personality, influential presence and extraordinary leadership touched millions of athletes, students, coaches, fans, family and friends for decades.

“Mike was an innovator, pioneer and visionary. He was a college football icon, a coaching legend but an even better person,” said Brett. “We are all better for having known Mike Leach. The thoughts and prayers of Mississippi State University and the entire Bulldog family are with his wife Sharon, his children and the entire Leach family.”