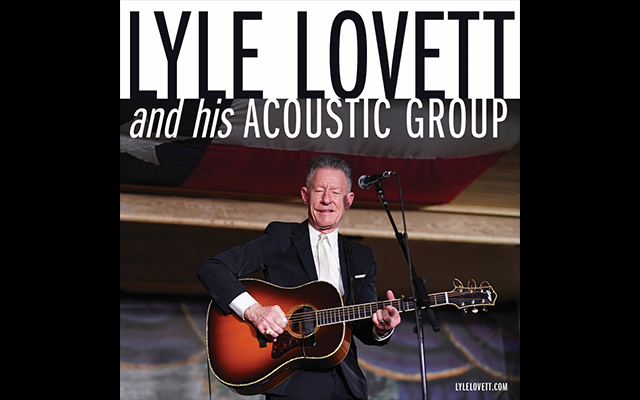 Lubbock, TX—Following an extensive run of U.S. tour dates, four-time Grammy-winning singer, composer and actor Lyle Lovett confirms an additional run of shows with his Acoustic Group in early 2023, with a stop at The Buddy Holly Hall of Performing Arts and Sciences on Friday, February 3, 2023, at 8 p.m.

The pared-down version of his Large Band brings together a collection of world-renowned musicians, spotlighting string players such as Leland Sklar, Jeff White and Luke Bulla. Whether touring with his Acoustic Group or his Large Band, Lovett’s live performances not only showcase his talents as a performer but also the diversity of his musical influences, making him one of the most compelling and captivating musicians in popular music.

Austin American-Statesman proclaims, “Playing with Lovett requires a high level of professional ability and versatility, but the way everyone interacts with each other onstage indicates it’s also about a blend of personalities who enjoy performing together.”

Lyle Lovett has broadened the definition of American music in a career that spans 14 albums. Since his self-titled debut in 1986, this Texas native has evolved into one of music’s most vibrant and iconic performers, earning him four Grammy Awards, the Americana Music Association’s inaugural Trailblazer Award and was named Texas’ State Musician.

Earlier this year, Lovett released his latest album, 12th of June,  on Verve Records to widespread critical praise. Produced by Chuck Ainlay and Lovett, 12th of June features a mix of new originals, including previously released singles “12th of June” and “Pants Is Overrated.”

Coupled with his gift for storytelling, the new album continues to highlight Lovett’s ability to fuse elements of jazz, country, western swing, folk, gospel and blues in a convention-defying manner that breaks down barriers.

More information can be found at lylelovett.com.